Plant morphology "represents a study of the development, form, and structure of plants, and, by implication, an attempt to interpret these on the basis of similarity of plan and origin." There are four major areas of investigation in plant morphology, and each overlaps with another field of the biological sciences.

First of all, morphology is comparative, meaning that the morphologist examines structures in many different plants of the same or different species, then draws comparisons and formulates ideas about similarities. When structures in different species are believed to exist and develop as a result of common, inherited genetic pathways, those structures are termed homologous. For example, the leaves of pine, oak, and cabbage all look very different, but share certain basic structures and arrangement of parts. The homology of leaves is an easy conclusion to make. The plant morphologist goes further, and discovers that the spines of cactus also share the same basic structure and development as leaves in other plants, and therefore cactus spines are homologous to leaves as well. This aspect of plant morphology overlaps with the study of plant evolution and paleobotany.

Thirdly, plant morphology studies plant structure at a range of scales. At the smallest scales are ultrastructure, the general structural features of cells visible only with the aid of an electron microscope, and cytology, the study of cells using optical microscopy. At this scale, plant morphology overlaps with plant anatomy as a field of study. At the largest scale is the study of plant growth habit, the overall architecture of a plant. The pattern of branching in a tree will vary from species to species, as will the appearance of a plant as a tree, herb, or grass.

Fourthly, plant morphology examines the pattern of development, the process by which structures originate and mature as a plant grows. While animals produce all the body parts they will ever have from early in their life, plants constantly produce new tissues and structures throughout their life. A living plant always has embryonic tissues. The way in which new structures mature as they are produced may be affected by the point in the plants life when they begin to develop, as well as by the environment to which the structures are exposed. A morphologist studies this process, the causes, and its result. This area of plant morphology overlaps with plant physiology and ecology.

A plant morphologist makes comparisons between structures in many different plants of the same or different species. Making such comparisons between similar structures in different plants tackles the question of why the structures are similar. It is quite likely that similar underlying causes of genetics, physiology, or response to the environment have led to this similarity in appearance. The result of scientific investigation into these causes can lead to one of two insights into the underlying biology:

Understanding which characteristics and structures belong to each type is an important part of understanding plant evolution. The evolutionary biologist relies on the plant morphologist to interpret structures, and in turn provides phylogenies of plant relationships that may lead to new morphological insights.

When structures in different species are believed to exist and develop as a result of common, inherited genetic pathways, those structures are termed homologous. For example, the leaves of pine, oak, and cabbage all look very different, but share certain basic structures and arrangement of parts. The homology of leaves is an easy conclusion to make. The plant morphologist goes further, and discovers that the spines of cactus also share the same basic structure and development as leaves in other plants, and therefore cactus spines are homologous to leaves as well.

When structures in different species are believed to exist and develop as a result of common adaptive responses to environmental pressure, those structures are termed convergent. For example, the fronds of Bryopsis plumosa and stems of Asparagus setaceus both have the same feathery branching appearance, even though one is an alga and one is a flowering plant. The similarity in overall structure occurs independently as a result of convergence. The growth form of many cacti and species of Euphorbia is very similar, even though they belong to widely distant families. The similarity results from common solutions to the problem of surviving in a hot, dry environment. 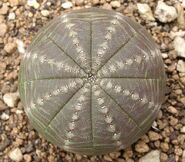 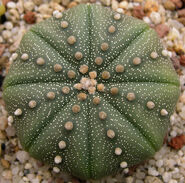 Add a photo to this gallery

The vegetative (somatic) structures of vascular plants include two major organ systems: (1) a shoot system, composed of stems and leaves, and (2) a root system. These two systems are common to nearly all vascular plants, and provide a unifying theme for the study of plant morphology.

Use in identification[edit | edit source]

Plant biologists use morphological characters of plants which can be compared, measured counted and described to assess the differences or similarities in plant taxa and use these characters for plant identification, classification and descriptions.

When characters are used in descriptions or for identification they are called diagnostic or key characters which can be either qualitative and quantitative.

Both kinds of characters can be very useful for the identification of plants.

The detailed study of reproductive structures in plants led to the discovery of the alternation of generations, found in all plants and most algae, by the German botanist Wilhelm Hofmeister. This discovery is one of the most important made in all of plant morphology, since it provides a common basis for understanding the life cycle of all plants.

Plant development is the process by which structures originate and mature as a plant grows. It is a subject studies in plant anatomy and plant physiology as well as plant morphology.

The process of development in plants is fundamentally different from that seen in vertebrate animals. When an animal embryo begins to develop, it will very early produce all of the body parts that it will ever have in its life. When the animal is born (or hatches from its egg), it has all its body parts and from that point will only grow larger and more mature. By contrast, plants constantly produce new tissues and structures throughout their life from meristems located at the tips of organs, or between mature tissues. Thus, a living plant always has embryonic tissues.

A vascular plant begins from a single celled zygote, formed by fertilization of an egg cell by a sperm cell. From that point, it begins to divide to form a plant embryo through the process of embryogenesis. As this happens, the resulting cells will organize so that one end becomes the first root, while the other end forms the tip of the shoot. In seed plants, the embryo will develop one or more "seed leaves" (cotyledons). By the end of embryogenesis, the young plant will have all the parts necessary to begin in its life.

Once the embryo germinates from its seed or parent plant, it begins to produce additional organs (leaves, stems, and roots) through the process of organogenesis. New roots grow from root meristems located at the tip of the root, and new stems and leaves grow from shoot meristems located at the tip of the shoot. Branching occurs when small clumps of cells left behind by the meristem, and which have not yet undergone cellular differentiation to form a specialized tissue, begin to grow as the tip of a new root or shoot. Growth from any such meristem at the tip of a root or shoot is termed primary growth and results in the lengthening of that root or shoot. Secondary growth results in widening of a root or shoot from divisions of cells in a cambium.

In addition to growth by cell division, a plant may grow through cell elongation. This occurs when individual cells or groups of cells grow longer. Not all plant cells will grow to the same length. When cells on one side of a stem grow longer and faster than cells on the other side, the stem will bend to the side of the slower growing cells as a result. This directional growth can occur via a plant's response to a particular stimulus, such as light (phototropism), gravity (gravitropism), water, (hydrotropism), and physical contact (thigmotropism).

Plants exhibit natural variation in their form and structure. While all organisms vary from individual to individual, plants exhibit an additional type of variation. Within a single individual, parts are repeated which may differ in form and structure from other similar parts. This variation is most easily seen in the leaves of a plant, though other organs such as stems and flowers may show similar variation. There are three primary causes of this variation: positional effects, environmental effects, and juvenility.

Although plants produce numerous copies of the same organ during their lives, not all copies of a particular organ will be identical. There is variation among the parts of a mature plant resulting from the relative position where the organ is produced. For example, along a new branch the leaves may vary in a consistent pattern along the branch. The form of leaves produced near the base of the branch will differ from leaves produced at the tip of the plant, and this difference is consistent from branch to branch on a given plant and in a given species. This difference persists after the leaves at both ends of the branch have matured, and is not the result of some leaves being younger than others.

The way in which new structures mature as they are produced may be affected by the point in the plants life when they begin to develop, as well as by the environment to which the structures are exposed. This can be seen in aquatic plants and emergent plants.

The organs and tissues produced by a young plant, such as a seedling, are often different from those that are produced by the same plant when it is older. This phenomenon is known as juvenility. For example, young trees will produce longer, leaner branches that grow upwards more than the branches they will produce as a fully grown tree. In addition, leaves produced during early growth tend to be larger, thinner, and more irregular than leaves on the adult plant. Species of juvenile plants may look so completely different from the adult leaves that egg-laying insects do not recognize the plant as food for their young.

Rolf Sattler has revised fundamental concepts of comparative morphology such as the concept of homology. He emphasized that homology should also include partial homology and quantitative homology. This leads to a continuum morphology that demonstrates a continuum between the morphological categories of root, shoot, stem (caulome), leaf (phyllome), and hair (trichome). How intermediates between the categories are best described has been discussed by Bruce K. Kirchoff et al.

Process morphology (dynamic morphology) describes and analyzes the dynamic continuum of plant form. According to this approach, structures do not have process(es), they are process(es). Thus, the structure/process dichotomy is overcome by "an enlargement of our concept of 'structure' so as to include and recognize that in the living organism it is not merely a question of spatial structure with an 'activity' as something over or against it, but that the concrete organism is a spatio-temporal structure and that this spatio-temporal structure is the activity itself."

For Jeune, Barabé and Lacroix, classical morphology (that is, mainstream morphology, based on a qualitative homology concept implying mutually exclusive categories) and continuum morphology are sub-classes of the more encompassing process morphology (dynamic morphology).

Retrieved from "https://horticultureandsoilscience.fandom.com/wiki/Plant_morphology?oldid=6651"
Community content is available under CC-BY-SA unless otherwise noted.