Edit
watch 01:36
We're Getting Mutants in the MCU - The Loop
Do you like this video?
Play Sound

A soil horizon is a layer parallel to the soil surface, whose physical characteristics differ from the layers above and beneath. Each soil type has at least one, usually three or four horizons. Horizons are defined in most cases by obvious physical features, chiefly colour and texture. These may be described both in absolute terms (particle size distribution for texture, for instance) and in terms relative to the surrounding material, i.e. ‘coarser’ or ‘sandier’ than the horizons above and below.

Identification and description of the horizons present at a given site is the first step in soil classification at higher levels, through the use of systems such as the USDA soil taxonomy or the Australian Soil Classification. The World Reference Base for Soil Resources lists 40 diagnostic horizons.

Many soils, especially temperate soils, conform to a similar general pattern of horizons, often represented as an ‘ideal’ soil in diagrams. Each main horizon is denoted by a capital letter, which may then be followed by several alphanumerical modifiers highlighting particular outstanding features of the horizon. While the general O-A-B-C-R sequence seems fairly universal, some variation exists between the classification systems in different parts of the world. In addition, the exact definition of each main horizon may differ slightly – for instance, the US system uses the thickness of a horizon as a distinguishing feature, while the Australian system does not. It should be emphasised that no one system is more correct – as artificial constructs, their utility lies in their ability to accurately describe local conditions in a consistent manner. Also, many subtropical and tropical areas have soils such as oxisols or aridisols that have very different horizons from an "ideal" soil, or no horizons at all.

The following horizons are listed by their position from top to bottom within the soil profile. Not all of these layers are present in every location – for instance, P horizons only form in areas which have been waterlogged for long periods of time. Soils with a history of human interference, for instance through major earthworks or regular deep ploughing, may lack distinct horizons almost completely. When examining soils in the field, attention must be paid to the local geomorphology and the historical uses to which the land has been put in order to ensure that the appropriate names are applied to the observed horizons. The horizon not listed is the O horizon which is grass and animal/plant life. Soil has three main horizons (A, B, and C), which will be explained below along with other layers.

Soil generally consists of visually and texturally distinct layers, which can be summarized as follows from top to bottom: 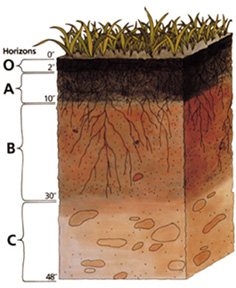 A) Surface soil: Layer of mineral soil with most organic matter accumulation and soil life. This layer eluviates (is depleted of) iron, clay, aluminum, organic compounds, and other soluble constituents. When eluviation is pronounced, a lighter colored "E" subsurface soil horizon is apparent at the base of the "A" horizon. A-horizons may also be the result of a combination of soil bioturbation and surface processes that winnow fine particles from biologically mounded topsoil. In this case, the A-horizon is regarded as a "biomantle".

B) Subsoil: This layer accumulates iron, clay, aluminum and organic compounds, a process referred to as illuviation.

The "O" stands for organic. It is a surface layer, dominated by the presence of large amounts of organic material in varying stages of decomposition. The O horizon should be considered distinct from the layer of leaf litter covering many heavily vegetated areas, which contains no weathered mineral particles and is not part of the soil itself. O horizons may be divided into O1 and O2 categories, whereby O1 horizons contain decomposed matter whose origin can be spotted on sight (for instance, fragments of rotting leaves), and O2 horizons containing only well-decomposed organic matter, the origin of which is not readily visible.

These horizons are also heavily organic, but are distinct from O horizons in that they form under waterlogged conditions. The “P” designation comes from their common name, peats. They may be divided into P1 and P2 in the same way as O Horizons. This layer accumulates iron, clay, aluminium and organic compounds, a process referred to as illuviation.

The A horizon is the top layer of the soil horizons or 'topsoil'. This layer has a layer of dark decomposed organic materials, which is called "humus".The technical definition of an A horizon may vary, but it is most commonly described in terms relative to deeper layers. "A" Horizons may be darker in color than deeper layers and contain more organic material, or they may be lighter but contain less clay or sesquioxides. The A is a surface horizon, and as such is also known as the zone in which most biological activity occurs. Soil organisms such as earthworms, potworms (enchytraeids), arthropods, nematodes, fungi, and many species of bacteria and archaea are concentrated here, often in close association with plant roots. Thus the A horizon may be referred to as the biomantle. However, since biological activity extends far deeper into the soil, it cannot be used as a chief distinguishing feature of an A horizon.

“E”, being short for eluviated, is most commonly used to label a horizon that has been significantly leached of its mineral and/or organic content, leaving a pale layer largely composed of silicates. These are present only in older, well-developed soils, and generally occur between the A and B horizons. In regions where this designation is not employed, leached layers are classified firstly as an A or B according to other characteristics, and then appended with the designation “e” (see the section below on horizon suffixes). In soils that contain gravels, due to animal bioturbation, a stonelayer commonly forms near or at the base of the E horizon.

The above layers may be referred to collectively as the "solum". The layers below have no collective name but are distinct in that they are noticeably less affected by surface soil-forming processes.

The B horizon is commonly referred to as "subsoil", and consists of mineral layers which may contain concentrations of clay or minerals such as iron or aluminium oxides or organic material moved there by leaching. Accordingly, this layer is also known as the "illuviated" horizon or the "zone of accumulation". In addition it is defined by having a distinctly different structure or consistency to the A horizon above and the horizons below. They may also have stronger colors (is higher chroma) than the A horizon.

As with the A horizon, the B horizon may be divided into B1, B2, and B3 types under the Australian system. B1 is a transitional horizon of the opposite nature to an A3 – dominated by the properties of the B horizons below it, but containing some A-horizon characteristics. B2 horizons have a concentration of clay, minerals, or organics and feature the strongest pedological development within the profile. B3 horizons are transitional between the overlying B layers and the material beneath it, whether C or D horizon.

The A3, B1, and B3 horizons are not tightly defined, and their use is generally at the discretion of the individual worker.

Plant roots penetrate through this layer, but it has very little humus. It is usually brownish or red because of the clay and iron oxides washed down from A horizon.

The C horizon is simply named so because it comes after A and B within the soil profile. This layer is little affected by soil forming processes (weathering), and the lack of pedological development is one of the defining attributes. The C Horizon may contain lumps or more likely large shelves of unweathered rock, rather than being made up solely of small fragments as in the solum. "Ghost" rock structure may be present within these horizons. The C horizon also contains parent material.

D horizons are not universally distinguished, but in the Australian system refer to "any soil material below the solum that is unlike the solum in general character, is not C horizon, and cannot be given reliable designation… [it] may be recognized by the contrast in pedologic organization between it and the overlying horizons" (MacDonald et al., 1990, p. 106).

R horizons denote the layer of partially weathered bedrock at the base of the soil profile. Unlike the above layers, R horizons largely comprise continuous masses (as opposed to boulders) of hard rock that cannot be excavated by hand. Soils formed in situ will exhibit strong similarities to this bedrock layer.

In addition to the main descriptors above, several modifiers exist to add necessary detail to each horizon. Firstly, each major horizon may be divided into sub-horizons by the addition of a numerical subscript, based on minor shifts in colour or texture with increasing depth (e.g., B21, B22, B23 etc.). While this can add necessary depth to a field description, workers should bear in mind that excessive division of a soil profile into narrow sub-horizons should be avoided. Walking as little as ten metres in any direction and digging another hole can often reveal a very different profile in regards to the depth and thickness of each horizon. Over-precise description can be a waste of time, and as a rule of thumb, layers thinner than 5cm (2 in) or so are best described as pans or segregations within a horizon rather than as a distinct layer.

Suffixes describing particular physical features of a horizon may also be added. These vary considerably between countries, but a limited selection of common ones employed in Australia is listed here:

Thus, a bleached A2 horizon would be described as ‘A2e’.

The US system employs largely similar suffixes, with a few important differences. For instance, 'e' under the US system denotes a horizon containing "organic material of intermediate decomposition" rather than a bleached horizon. A full list of suffixes is available online as part of the USDA Soil Survey Manual.

While soil formation is generally described as occurring in situ, as rock breaks down and is mixed with other materials, the process is often far more complicated. For instance, a fully formed profile may have developed in an area only to be buried by wind- or water-deposited sediments which later formed into another soil profile. This sort of occurrence is most common in coastal areas, and descriptions are modified by numerical prefixes. Thus, a profile containing a buried sequence could be structured O, A1, A2, B2, 2A2, 2B21, 2B22, 2C with the buried profile commencing at 2A2.

Community content is available under CC-BY-SA unless otherwise noted.
Advertisement